So since about two weeks, I’m back in Belgium! The DiXiT postdoc in Sweden has run its course, and now I’m working at the University of Antwerp again. More on that soon – but the long and short of it is that I’ve moved back home, and was very happy to return to Annelies (and our cats) again. No boat nor post-boat odyssey this time: my dad came to pick me up in his car and we drove back home together – which is pretty amazing. Returning home, I found Flanders in full spring, with green leaves and blossoms everywhere (which wasn’t the case in Sweden yet), and occasional days of great cycling weather. And last Sunday was exactly one such day, with a bright sun and temperatures up to 22°C (only to plummet to a chilly 12°C again on the next day), so we felt a bike ride was in order.

Knowing that Sunday was going to be the best day, I tried to get everything ready on Saturday so my road bike (that I was looking forward to getting some more miles on after having left it at home during the postdoc) was up to the challenge. This included changing the tube and tyre of the front wheel, because I’d run a nasty flat a week earlier before finishing even my first K. The reason was that my front tyre was ripped from a minor cycling accident I’d had on a visit home a few months earlier, so the tube wasn’t protected as it should have been. So anyway, I fix the flat and replace the ripped tyre with my old tyre that I luckily still had lying around, so I think I’m good to go and call it a day. But of course things were never going to be that simple. The next day (thankfully before we take off) it became clear that Annelies’s bike had a puncture too, and I spent a lot of time replacing that one (especially since her tyres are very tight and were a pain getting off and on the wheels again). 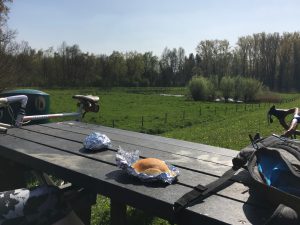 Still, wasting all this time was worth it because the ride was beautiful. We took it relatively easy, cycling at an average speed of a little under 20k/h and stopping now and then to eat or drink something. And the weather was great, the sky was blue and there was no wind to speak of. We did just under 60k, going south via the cycling highway up to the river in Duffel, where we stopped to have a picnic. And then following it west (instead of east, which would bring us to the Doomed Track), following it all the way to Niel, where the Rupel river flows into the Scheldt, then following that north up to Hoboken and Antwerp city where we join the cycling highway again and follow it home.

That last stretch is a bit of a let down because you’re back in the city and are suddenly confronted with a lot of cars and bad cycling paths again, but the first +40k were wonderful, cycling up to and alongside the river. And around K 30, we stopped and met up with Annelies’s grandparents for a beer on a bar terrace next to the river and in the sun. So all in all it was a great success, and I was very happy to be out with Annelies and on my road bike again. Hope to have many more of those this spring and summer.

But first I’ll need to train some more for a different sport: running. Because after completing our ride I apparently signed up to join the Antwerp 10 Miles that are taking place in a little over a week. And although I’ve picked up running again this autumn/winter when I was in Sweden (because it was more convenient than cycling), I haven’t actually run a single stretch of 10 miles yet. I ran just over 13k once, which is close enough to convince me that I should be able to run it, but that’s about it, so we’ll have to see how it goes. Fingers crossed! 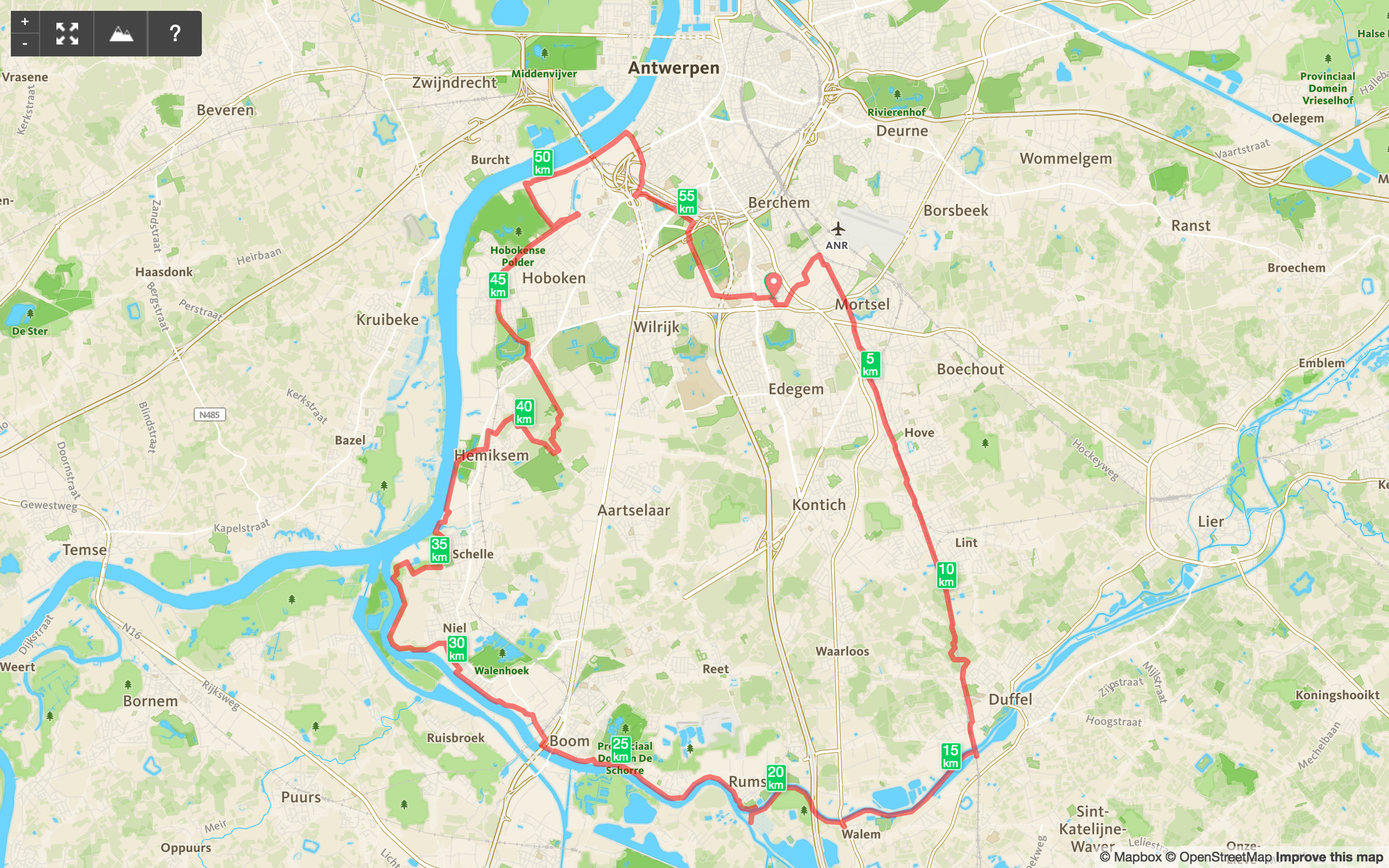