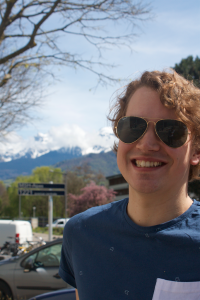 In Grenoble at the DiXiT Ethics Event.

My name is Wout Dillen, I’m from Antwerp (Belgium), and I’m happy to have become part of the DiXiT network at the start of last month! Almost entering its final year, DiXiT has already become quite a well-known network in the field of digital scholarly editing in Europe. Even so, applying for this position I was probably a little more familiar with the project than most, as the University of Antwerp where I conducted my doctoral research is one of DiXiT’s full partners, which made Elli and Aodhàn my colleagues at the Centre for Manuscript Genetics. And of course, I already knew some of my other new colleagues too: from attending the same conferences, but also because some of the DiXiT fellows are contributing to the Lexicon of Scholarly Editing, a project of the European Society for Textual Scholarship (ESTS) initiated by Dirk Van Hulle that I developed as an appendix for my dissertation. So I’m really glad to be an official part of the team now!

In Antwerp, my research had been on the impact of the digital medium on the theory and practice of scholarly editing and textual criticism in general, and on genetic editing in particular. My thesis was titled “Digital Scholarly Editing for the Genetic Orientation. The Making of a Genetic Edition of Samuel Beckett’s works”, and was part of an ERC funded project called Creative Undoing in Textual Scholarship (CUTS)” supervised by Dirk. Like that project, the second part of my thesis used the Beckett Digital Manuscript Project (BDMP) we are developing at the University of Antwerp as a case study to explore what kind of challenges and opportunities the digital medium introduces into the field, and how we can try to solve the new problems we face. So that is part of my background in Digital Scholarly Editing that led me to apply for the ER1 position in Borås, Sweden, and where I started working on the 1st of April this year. 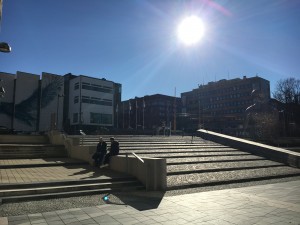 The University of Borås

At the University of Borås, the DiXiT division is part of the Swedish School for Library and Information Science (SSLIS), where Mats Dahlström and Mikael Gunnarsson act as supervisors, and where — as the regular reader of this blog will already know — ESR fellow Merisa Martinez is based a well. All of whom have made me feel very welcome ever since I arrived in Sweden about five weeks ago. As part of the LIS department rather than the department of Literature I find myself a little outside of my comfort zone, but for a researcher that is probably the best place to be. And the intersection between these two fields is an exciting place at the moment: as scholarly editing is moving towards the digital medium, the link between textual critics and scholarly editors on the one hand, and memory institutions such as university libraries on the other is only becoming more and more important.

The most obvious example of this connection is probably the collaboration between scholarly editors and memory institutions when it comes to issues of sustainability and data persistence. As a digital object, the digital scholarly edition is a new type of publication with different needs from its printed predecessor. Rather than a (print) publisher and distributor, the digital scholarly edition needs reliable and sustainable hosting — for which the servers of collaborating memory institutions seem like an obvious choice. At DARIAH-VL, a Flemish consortium within DARIAH-BE, where I was working as a coordinator for the Antwerp division since January, this is a conversation we are trying to develop on a regional (and later hopefully national) level, and one I will continue to be a part of through my DARIAH affiliation.

But there is an important connection at the other end of the process too. Since the digital turn, scholarly editors are increasingly working with digitized resources. And in many cases, the digitization processes that are deployed to create these resources are performed (or outsourced) by memory institutions. This means that there will need to be close collaborations and a good line of communication between researchers on the one hand, and the representatives of memory institutions on the other, because these digitized resources become such an important aspect of the digital scholarly edition. 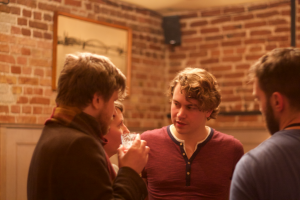 A few DiXiT fellas and I at Convention 2 in Cologne.

In the first stage, the digital reproductions may be integrated in the editor’s workflow: they become the materials the editor works with, and on which she bases her editorial interpretation of the text’s transmission. In a second stage, they may become the core materials of the digital scholarly edition: they are the materials the edition’s user will come into contact with, and on the basis of which that user will base her critical assessment of the editor’s claims. Since we are placing so much trust in the digital avatars of the historical documents we study, authenticity and quality control are important issues that need to be considered at the outset of the digital scholarly editing project.

And that’s exactly what my project at the University of Borås is about: it calls for a critical assessment of digitization practices, focusing on the moment the analog object is digitally captured — a process that retains as well as discards a substantial amount of information. To do that, I’ll examine the collaborations and processes of negotiation between researchers, memory institutions, and other third party industrial agents that may have an impact on the type and depth of quality measures that are established to ensure the authenticity of digital reproductions. 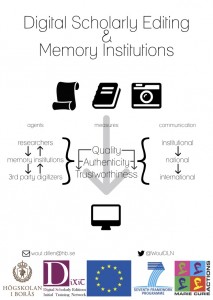 The ‘postercard’ version of my poster at DH Benelux.

First, I’ll look at the problem on the institutional level, seeing how these measures are negotiated and established. For this aspect, I’ll take the National Library of Sweden in Stockholm as a case study. And afterwards, I’ll take a step back, and see how these measures are communicated and renegotiated on the national (and perhaps even international) level. I think it’s important to think about standardizing these practices, because so much depends on it: if we agree that the editor’s accountability is more important than her so-called ‘objectivity’ — if this is indeed something that can be achieved in the first place (Pierazzo 2015, 13), the user will need to trust that the edition’s facsimiles are as accurate and qualitative as the transcriptions she is comparing those images to.

So that’s what I’ll be working on for the following year! If you want to know more, you can send me an email, find me on Twitter, or check out my personal website where I blog about my interests — both inside and outside of academia. Or you can come to the DH Benelux conference in Belval, Luxembourg next month, where I’ll be presenting the project as a poster.