This is an edited translation into English of a letter I wrote to my father while I was trying to get from Gothenburg to Borås, after docking in Gothenburg’s industrial harbour. Some events may have been exaggerated a little. 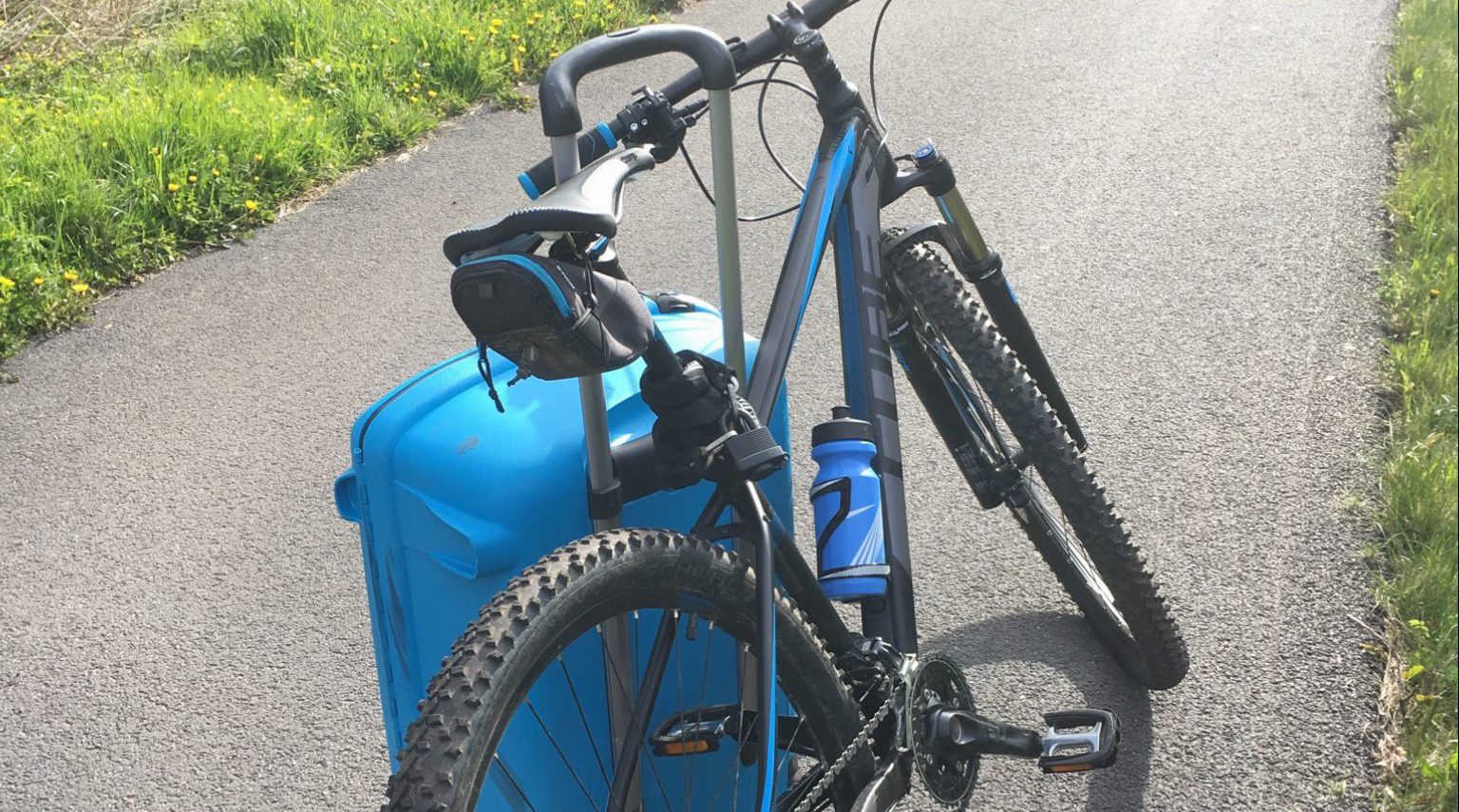 We’ve just docked in Gothenburg! Taking the boat was quite an experience! It looks like I made it in one piece. But I don’t want to jinx it, because I’m not there yet. We can’t disembark from the ship until they come fetch us. They’ll first have to unload all the Volvo cars I suspect. So now it’s time for a quick shower, some breakfast, and hoping they come fetch us soon so I can start heading for Borås.

I’m writing this as I’m waiting for the bus from the harbour to the city. After my breakfast, I didn’t have to wait too long before an officer came to fetch us passengers and we could leave. He directed me to my bike, and cheered me on. But the Volvo boat isn’t a pleasure cruise of course. And so when I finally stepped ashore, I was standing in the middle of the industrial part of the harbour. Getting to the nearest bus stop with my luggage and my bike was already a challenge in itself…

Thanks to Google Maps, when I stepped ashore this morning — luggage (on wheels) in one hand, bike in the other — I knew more or less where I was going. The general direction to this bus stop. I started going, waved goodbye to the crew, who kindly waved back. And on my way here, I met a couple of longshoremen, whom I approached to check if I was still going in the right direction. Which they told me I was.

But what all these people failed to mention, was that I wasn’t supposed to be there in the first place…

That only became clear to me when a harbour watchman pulled over in front of me, got out of his van, and asked me where I thought I was going. “To the main road,” I answered, “to catch a ride to Gothenburg city”.

– “Did you know it is a serious offence to be walking or cycling in the industrial harbour area without supervision?”

– “If you don’t have a car, you’re supposed to call us harbour watchmen through your ship’s crew, so we can come fetch you and escort you outside of the industrial area where you can call a cab or something.”

“Well,” I thought, “that would have been great information to have, at the moment that I stepped ashore, and waved goodbye to the crew members…” Or at any other moment when I stopped and asked directions to one of the longshoremen… You would have thought that the fact that I wasn’t wearing fluorescent clothing, or that I was carrying a bike and a suitcase, or even that I was constantly asking people for directions, would have given someone an indication that I was a tourist who didn’t know what was what and who could use a little help. But no.

Anyway, I’ll have to continue later on, I think my bus is arriving. 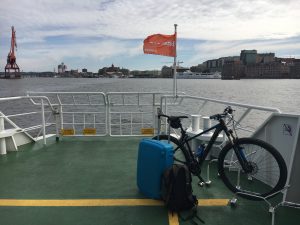 It’s almost two hours later, and I’m already a lot closer to home than I was. But I’m not there yet! I’m writing this on board of my second boat of the day: the ferry. Not a mode of transportation I thought I would be taking today! But I’m getting ahead of myself. I was writing about my confrontation with the harbour police.

Long story short: the harbour watchman saw that I didn’t really know what I was doing, and let me go with a warning. He helped me load my luggage and bike into his van, and drove me to the edge of the industrial area. Although by then I was already almost there, and might have even gotten there sooner if he hadn’t stopped me. Especially because we had to wait a long time to let a freight train pass. (It was awkward. None of us said a word because the security guy had put the speakers of his car on full blast, so all there was for me to do was to listen to a podcast in which two American sports commentators were discussing a female wrestling match after the facts.) But yes, that would have meant breaking the rules. And the Swedes do love their rules.

He dropped me off, pointed me to an office where I could ask someone to call me a cab, and left. And so I entered, to find a guy sitting behind a registration desk.

Me: “Yes. Or, if you know any busses I could take in the neighborhood? That would work to.”

Him: “A bus! Yes, you can take a bus! But that would be cheaper. A taxi would be more expensive. What do you want to do? It is completely up to you”.

Him: “Yes. You see that building there behind me? Go there, pass the corner, and you will see a bus stop.”

I walk outside, take my bike in one hand and luggage in the other, and walk towards the bus station. But I’ve only just about passed the registration office, or I am stopped in my tracks.

Railroad tracks to be precise. Apparently the registration office and the busstation are divided by a large freight train track. And to cross it, I would have to cross a big iron pedestrians’ bridge. With my bike and luggage, that was bound to become a parody of that riddle, you know, of the man with the wolf, the sheep, and the cabbage, who wanted to cross the river, but didn’t have enough room in his boat to carry all three across at once.

Anyway — I managed to get across, found the bus stop, and was lucky enough that the bus arrived quickly! The driver stopped, and I asked him: “Can I take my bike on the bus?” To which the driver answered: “Bike? Bike no. Luggage yes.” Me again: “Really?? Oh. Well. Ok. Never mind.” At which point the driver closed the doors and drove off. There I was: stranded at the edge of the harbour with my luggage, backpack and bike!

But I’ll have to take another break. The ferry’s reaching the shore. I’ll continue later on!

Another hour later, and the finish is finally in sight:  I’m on the bus to Borås. Thankfully, the bus from Gothenburg to Borås is big enough that it could accommodate my bike and luggage in the cargo space. Because I wasn’t allowed to take it on the train. Go figure. Anyway, I’m sitting down again, with plenty of time to finish my story.

So, there I was. At the busstop. Not allowed to take the bus. I thought about giving it another try with the next bus, but decided not to. Chances that it would work on the second try were slim (because it wouldn’t have been according to the rules!), and the next direct bus would only arrive at the station at 15:45, more than 6 hours later. There were a couple other busses that I could take, but they didn’t travel to Gothenburg directly, and went in the wrong direction before the layover. So even if by some miracle I would be allowed to take my bike on the first bus, it would need to work a second time too. If not, I’d have to cover an even larger distance to reach the city.

So as I saw it, I had two options. Either go back across the bridge, and ask the guy at the reception desk to order a taxi that would have been crazily expensive. Or just start traveling towards Gothenburg myself. Google Maps said I was about 10k outside of the city center: two hours on foot, or 40 minutes on the bike (calculated without a backpack and a hardshell luggage case in mind, I’m guessing). Luckily, the map also indicated an alternative route, that allowed me to cover a large part of the distance by ferry. Which was fine by me, because it meant I had to cover about 4k less myself.

I started off, alternating between walking and cycling. The uphill parts mostly on foot; the downhill parts mostly on bike, pulling my suitcase alongside my bike on it’s little suitcase wheels. (Because this is Sweden. Obviously the road wasn’t going to be as flat as it would be back in Belgium.) It was quite a trip, but I made it. After taking the ferry, it was only a little further to the train station, where (as I said), I was lucky enough to find a bus that would also store my bike in the cargo space.

Anyway, it looks like we’re arriving in Borås. I’m happy I’m living so close to the train station. (Although that’s not so difficult. Borås is tiny.)

Talk to you later! And say hi to everyone from me!