As I already indicated in my previous post — which already dates back a couple of months, sorry for that! — a busy schedule has delayed this post quite a lot. But it’s finally here. I hope you’ll enjoy!

At the end of April, I went back home to Belgium, to get the last of my stuff that I needed for my move to Borås. As a lucky coincidence, this was also the week of the Beckett and Modernism conference that my friends at the Centre for Manuscript Genetics in Antwerp were organising, so it gave me a chance to see them again (and to reconnect with some of my colleagues in Beckett Studies), to enjoy the conference, and to witness the launch of the Beckett Digital Manuscript Project’s new Library Module. 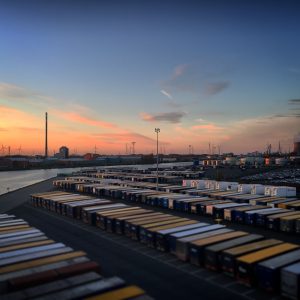 The most important stuff that I still needed to transport to Borås (apart from beer and chocolate, obviously) was stuff that I needed for the Swedish spring and summer: summer clothes, cycling gear, etc. Because it was going to be a pretty heavy suitcase, and because I wanted to bring my mountainbike with me as well, I decided not to take the plane this time, but (as you may have seen on Twitter) to go by boat instead. Not a pleasure cruise, mind you, but a passengers’ cabin on a cargo ship. The Volvo-boat, to be exact, shipping Volvo cars between Ghent and Gothenburg.

A couple of my friends called me crazy, and asked why I didn’t just upgrade my luggage to include a heavier suitcase, and bought a case to transport my bike on the plane as well. Which was also an option, of course, albeit a slightly more expensive one for the dates that I needed to travel, and one that didn’t allow me to circumvent the airlines’ pricing scheme that makes it more expensive to book a single flight than the two flights of a return trip put together. So once I got to Borås, my new ‘base’ would be there, and I would be able to book all of my next flights trip per trip, rather than booking the last flight of my previous trip together with the first flight of my next one.

Plus… Well… I would be traveling by boat — how cool is that? The longest I’d been on a boat before was on the ferry from Calais to Dover back when I was doing my Erasmus studies in Cardiff, Wales. This trip would be something completely different.

So on Saturday evening I was dropped off with my suitcase and my bike in the harbour of Ghent, where I boarded the ship. Someone checked my ID and told me where to put my bag, and I was shown to my cabin. A small room, but it had everything I needed: a bed, a large armchair, a private bathroom, and a seaside window. I settled in, roamed the communal rooms and the deck, and waited for the boat to set sail. (Well, without any actual sails, obviously). When we did, the sun had already set, and it was starting to get dark.

As you may or may not know, Ghent is still a ways from the shore. If you travel north, it’s still 40 km before you hit the open sea, and you have to pass through a piece of the Netherlands first. That’s what we did too: we followed the channel north, that lead us all the way up to Terneuzen. Because it’s a channel though, there are limitations as to how fast the ship could travel, so that first part we were moving quite slowly. Those 40 first kilometers took us about three hours. But it was great: all along the channel there were numerous patches of harbour industry, with factories, wind turbines, incinerators, power plants, etc. And since the sun had set, all the lights started to go on, which made for quite an impressive sight — even more so when the sky had finally turned pitch black as we traveled onwards, away from the big cities, which more or less turned those lights into our only points of reference. So I put on my coat, and went outside to enjoy the industrial landscape and take some pictures. 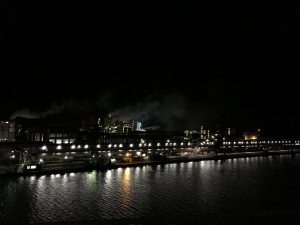 Just after midnight, then, we finally entered the sluice at Terneuzen that would lead us from the channel into the sea. When we left the sluice, that’s when you started to feel the billow of the sea. Because the weather was fine and the sea was calm the billow was very gentle, but you could still feel the difference from the channel — where the tides and the waves are controlled by the sluice. This was also when they switched the ship’s larger engines on so we could finally start to pick up some speed. Which basically made you feel like you were standing on a vibrating plate the entire time. A funny feeling, but you get used to it pretty quickly. 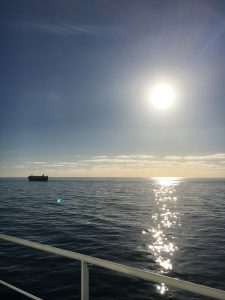 When I woke up the next morning, we had already traveled quite a distance. We had already passed Amsterdam, and were approaching the roof of the Netherlands. I was amazed to find that my phone still had service. But then again, we could still see the Dutch coast in the (far) distance, and when you think of it, in the open sea there’s really nothing standing in the way of the signal’s waves. It was only when we could no longer see the coast, when we had started to cut the corner from the top of the Netherlands to the middle of Denmark (rather than following the coast line all the way past Germany) that I lost my signal and was completely off the grid. This took most of the day, about eight hours or so. I’ll admit that I missed it more than I thought I would. But mostly because I wanted to let people know that I was OK, and found that I couldn’t. Except for that, it was actually kind of a relief to be completely disconnected from the rest of the world for a little while. 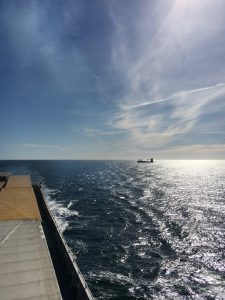 The rest of the day was rather uneventful, but then again, that was more or less the point. There was not a lot to do, and not a lot of other people. There were six other passengers, and the crew of course — but they were all busy in other parts of the ship most of the time. And there was not a lot to ‘see’, either. some ships here and there, sometimes a field of wind turbines, or some oil refineries, but nothing but water for the rest. So it’s not like I could spend my day taking all kinds of different pictures, as it had been the case the night before when we were traveling across the channel. But I knew that I would have to entertain myself for the entire trip beforehand, so I had brought plenty of stuff to read, and succeeded in getting some work done too — something that’s a lot more difficult on a plane for instance. And the weather was really good, so I spent a lot of time reading in the sun on the deck, which was nice. It made for a very relaxing trip. 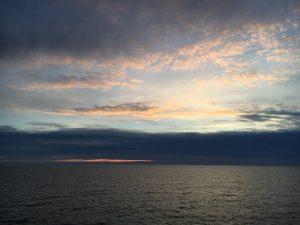 At around seven in the evening, we started to approach Denmark, so we could see the coast again, and I regained my signal. And afterwards the sun started to set, which was nice, although it was a pity that clouds had formed and blocked most of the view. And then it turned completely dark and there was really nothing to see anymore. A single light at the coastline in the distance every now and then, sometimes the lights of a ship, and not even any stars because of the clouds. So I read some more and called it an early night, because the next day would be a long and early day. When I woke, we had just started to dock, and after breakfast and a shower it wasn’t too long before I found myself on Swedish soil once again. That’s when the real challenge would start: getting from the middle of nowhere in the harbour of Gothenburg to the city centre, and then to Borås. But that will be a story for a next post! One that won’t take so long as this one, I promise.

2 thoughts on “The Boat from Ghent to Gothenburg”